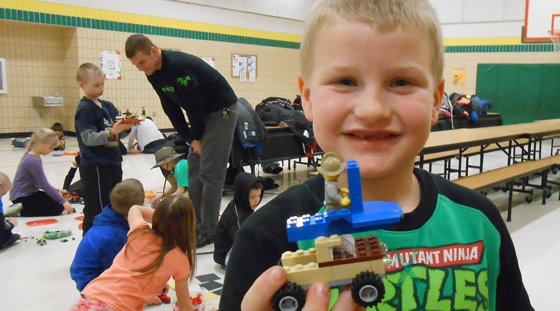 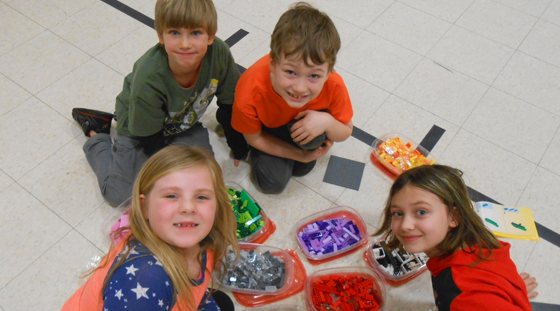 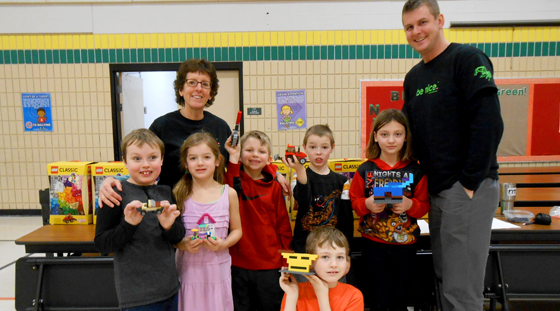 “I want to be an engineer,” one student says. “We build and design stuff, and that’s what engineers do. That’s what I want to do when I get older.” —Coopersville student

At first glance, a room full of young students playing with Legos might seem like kids just having fun. But teachers and administrators at Coopersville East Elementary and West Early Childhood Center introduced Lego Club to teach students how to develop important social emotional skills and build relationships with their peers through creative play.

Creative play involves any type of object that sparks imagination and promotes creative expression. It is recognized for its many therapeutic effects on aspects of mental, physical and emotional well-being.

Corey DeRider, principal of East Elementary and West Early Childhood Center, started the club because he believed this kind of learning experience would be beneficial to students at the schools–especially those who were having trouble communicating with their teachers and peers.

“Many of the students who participate are the ones who have a hard time in class, not necessarily academically, but socially,” says Corey. “Lego Club helps them learn how to express themselves. You’ll see kids who don’t talk much in class discussing what they’re going to build and how they can help their friends build. They really feel like they’re part of a team.”

During each four-week long session of Lego Club, students meet in their school’s cafeteria and work in small groups to build unique pieces based on a theme, such as oceans, animals or buildings. Grants from local nonprofits help to fund the program, allowing any interested student the opportunity to participate.

“I joined Lego Club because I like to build with Legos,” says one excited second grader. “One week our theme was animals, and I built a barn for everyone's animals to live in. I can’t wait to build even better things, like volcanos and houses.”

Lego Club places an emphasis on creating a judgment-free space, allowing the kids to take risks and challenge themselves to try new things. Because of this, students begin to open up to each other and feel more comfortable sharing their thoughts, ideas and suggestions, which also translates to the classroom.

“One of the biggest changes I witness in students who participate in Lego Club is the growth of their teamwork abilities,” says Libby Richardson, a teacher at East Elementary. “I remember at the first Lego Club the teachers spent a significant amount of time trying to get the kids to work as a team. But it only took a little while for the students to take off on their own. It was a joy to see them including others, brainstorming ideas and working together to make something truly unique.”

The club encourages students to grow and develop relationships with their peers. Teachers and administrators have noticed participants coming together, building friendships with kids they may not have interacted with outside the club.

“I have made a bunch of new friends,” says an eight-year-old club member. “I help them find the pieces they need and help them finish if they’re running out of time, and they help me, too.”

“We try to teach students how to notice if someone is having a rough day and give them strategies to use to try to include them and involve them in the group,” Corey says. “We try to get them to play and use their words to talk about their problems. We saw a huge increase in that.”

Many teachers believe, with the club’s help, students also develop a confidence in their work that has made them more confident in themselves. For some, Lego Club is even helping them discover what they are most passionate about.

“I want to be an engineer,” one student says. “We build and design stuff, and that’s what engineers do. That’s what I want to do when I get older.”

After seeing the remarkable social growth of club members, the schools were inspired to continue expanding the program, getting more and more kids involved.

“Lego Club provides a great opportunity for the kids to make new friends, work collaboratively with peers, play and be creative,” says Libby. “It’s awesome to see them take such pride in themselves and their work.”

“This stethoscope is a game-changer for me and something I wouldn’t have been able to afford without the connection Tech Center helped me make with MRS,” —Rey Gonzalez, Careerline Tech Center student