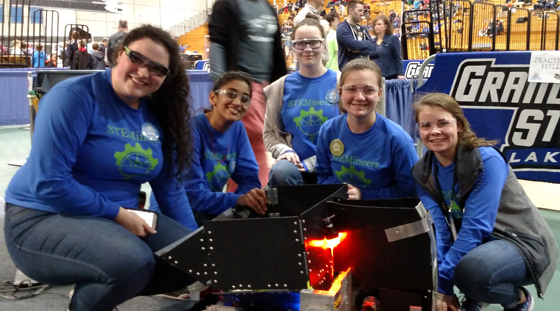 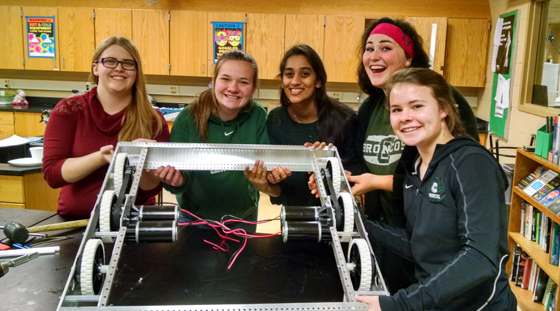 “The team actually made me look more in-depth at engineering in ways I haven’t considered before. It helped me realize that this might be something I’d really enjoy as a future career.” —Isabelle Gomez, Coopersville High robotics team member

The robotics team at Coopersville High School has a history of being high-ranking, fierce competitors. Students from all grade levels come together to build amazing robots, solve complex problems, and make lifelong friends all while working as a team.

Despite all of its successes, the team had one problem - there were not enough girls participating.

Science teacher and robotics advisor Ryan Schoenborn thought this was odd because he knew there were many girls in his classes that were great at science and math and would be perfect for the team.

He decided to do something about it. He asked them to join.

“With any kind of student, I find that going up to them and letting them know you directly want them to join something because they are good at it helps them get over any insecurities,” Ryan says. “Asking students personally helps them feel valued.”

Ryan’s method of encouraging students worked, as there are now five active members of the newly initiated girls’ robotics team— named “The STEMineers”— each of which are interested in careers revolving around STEM.

“Having more women in STEM is very necessary,” Ryan says. “Most of the people who got me excited about science while I was in college were women. There’s power in diverse voices.”

Those girls who got involved also discovered new possibilities for their futures.

“The team actually made me look more in-depth at engineering in ways I haven’t considered before,” eleventh-grader and robotics team member Isabelle Gomez says. “It helped me realize that this might be something I’d really enjoy as a future career.”

Increasing involvement among girls in STEM is no small obstacle because those career fields tend to be traditionally occupied by men. Lynn VanSickle, from the Zeeland-based engineering firm Disher Design and Development, thinks we can change that by simply being more supportive of all students who are interested in STEM.

“I think we should be encouraging students of any gender who are interested in STEM to join activities like robotics,” Lynn says. “My two daughters are actually a part of the team so I spend a lot of time coaching them internally while mentoring the entire girls’ team on my own time. It’s very important to be supportive.”

Lynn and his company provide mentorship to students on the team. For instance, they lead training sessions to help team members understand basic engineering concepts and how to use certain tools. Their work with the team has helped students feel confident about their goal and life plans.

“Joining robotics has been very eye-opening for me,” 11th grader Celeste LeMieux says. “I’ve gotten better at problem-solving, working through my nervousness, and made good friends all from the team. It’s such a cool opportunity.”

Ryan hopes the success of the inaugural year of the girls’ robotics team results in more dedicated, young women who will join next year.

“I’m incredibly proud of the outcome,” Ryan says. “The girls have shown STEM is no longer just an activity for boys.”

“This stethoscope is a game-changer for me and something I wouldn’t have been able to afford without the connection Tech Center helped me make with MRS,” —Rey Gonzalez, Careerline Tech Center student