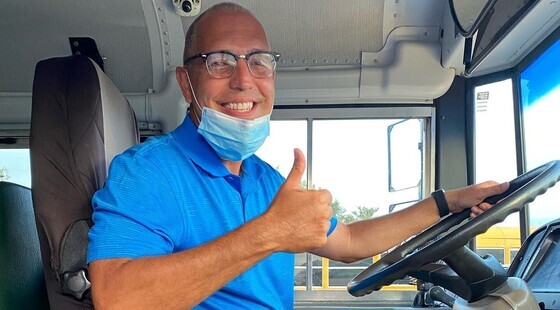 Sometimes, Holland High School English teacher Greg Ceithaml’s vehicle takes up too many spots in the teachers’ parking lot, but that’s what happens when he adds busing kids to and from school to his daily teaching duties.

Greg obtained his commercial driver’s license (CDL) in 2019 because there was a shortage of bus drivers. As coach of both men’s and women’s high school soccer teams, it gave him peace of mind to know his teams would always have transportation to and from competitions.

Since then, the bus driver shortage has become more critical resulting in some bus routes being canceled altogether. So when district administrators asked Greg to help out for a few months at the start of the school year, he jumped right in.

“The pandemic has been difficult on many people and, unfortunately, many kids were deeply affected,” Greg says. “I feel having a ride to school is very important, and I knew I had to help any way I could to get these students to school.”

Greg would arrive at the bus garage at 4:30 am, drop off his car, then drive a bus route picking up students and taking them to the high school where he would spend his day teaching. When the bell rang at the end of the day he would head back to the bus and drive students home before coaching the soccer team for two hours and finally heading home. And repeat.

Even though on some game days, Greg didn’t get home until 10:00 pm, he enjoyed his time as a bus driver and being with the students in a different capacity.

“I didn’t have many of my students from class on the bus, but it didn’t take long to form a bond with them. It was nice to see the kids every day and say ‘hello’ and then see them in the hallway at school,” he says. He shared that after returning from a few days off for family matters, the students were so compassionate and sweet. It lightened his return to work. “They are just great kids,” he says.

As the district was able to add more bus drivers, he has taken a step back from driving students to and from school, although he fills in when he can.

“Nothing I did was particularly special. We have great staff and teachers at Holland High, and anyone would have done the same thing,” Greg humbly says.

“We often hear the Power H Shop is a big blessing for families. And that is why we’re here!”—Lauren Gray, OCSN Coordinator for Holland High School